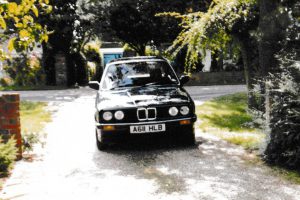 ‘Back in the day’, (early 1980′ s,) we (Ray & I) decided it was necessary for me to change my ‘run around’ car which at that time was a Mini Traveller with grass growing out of the window’s. Nowadays it would be a good classic- (after a bit of body work restoration!)

A friend said he knew of an almost new car coming available. He said it would be a good buy, and that he knew the background of the vehicle.  He explained that the owner was being transferred to Hong Kong with his Company and wished to sell the car.  He had taken it to the local garage and was insulted with the amount of money they offered, knowing full well they would put it on the forecourt and add £2,000 – £2,500 to the price.  He was willing to sell at the price the garage offered.  It was a small BMW 3 series, 1800 automatic, absolutely immaculate and lovely.

It was more than we had anticipated paying, but after a sleepless night, we decided it was a good proposition.  So we bought it.

The only time we had a problem with it, was when our younger son borrowed it.  He had only been gone five minutes when the telephone rang to say he’d had an accident.   Fortunately, all he had done was attempted to change the radio station whilst driving and hit a tree!

I covered many miles in the car, and I loved every minute. It was so easy to drive, and so easy to park. I reckon I could have parked her on a sixpence, especially outside Sainsbury’s (or Tesco’s Chas)

I was delighted with the car which I owned for the next 18 years. One very careful lady owner!

We then decided it was time to change her as it was getting more difficult to get her through the MOT.  Our friend, who had his own garage, stated he could not guarantee how much longer he could get it to the standard required.

Friends had a seventeen-year-old daughter who was learning to drive. We offered them the car, and explained that at her age the insurance would not come cheap,  and although it did have a 12 month MOT, who knew what the next year would bring!  They were not perturbed and said they would be delighted to have the car.

However, when Sarah passed her test, and they checked out the insurance cost,  and soon realised that  a new driver and BMW was not a viable option.  They asked if we would mind if they sold the car and we said ‘not at all’.

They advertised,  a man rang and asked if it was black, the answer being no- it was deep blue – he wanted black.   However 2 weeks later he phoned back and asked ‘was it a dark blue’ and was told ‘yes’.   He came and bought her for £200 which we told our friends to put towards Sarah’s new car.

Sometime later, I was watching Inspector Lynley on TV  and shouted ‘that’s  my car’ as this beautiful dark blue BMW came round the corner- still looking immaculate.   It supposedly crashed, but when we saw the picture of a car on its side, with  the wheels still spinning round (which did not belong to my car) I firmly believe they thought it was too good to crash!!!  But whatever happened, she went out with a bang-and in true style.