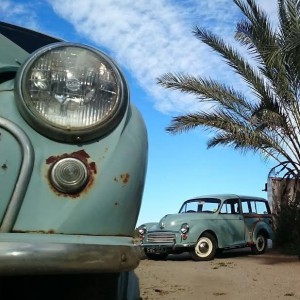 Paul and I have had a Morris in the family for as far back as I can remember. On our first date Paul turned up in a 1969 green Morris Minor Traveller. I was horrified!There I was dressed up to the nines ready for a ‘posh’ night out. I did not expect to be ‘taken out’ in a midwife or school master’s car as I associated the Minor’s with back then. I wasn’t too impressed (with the car) and my friends, well… they found it highly amusing. However, I soon got used to it. It was fun, different and above all cheap to run. Since then we have had many more.

Our favourite was a maroon one which we part-exchanged for a Ford Sierra. Originally manufactured in 1962, it was sound and still going strong. We went everywhere in it. The kids hated it! They were just at that teenage in-between age so if they misbehaved, their punishment was to be taken to school in the Moggie-or worse Paul would wave at their friends as he passed them whilst the kids would hide down in the back seat, trying to go incognito and praying their friends did not see them. They really did not appreciate their dad driving round and round the roundabout like Mr Bean- ‘You’re so not funny dad!’ was the usual remark.

Taken outside our (then) house 25 years ago.

Even worse, one day Paul turned up in a Morris Minor van he just had to buy. ‘Oh my God’ the kids declared ‘Dad thinks he’s Postman Pat!’ and to make matters worse he bought a Postman Pat tape and played it full blast from the homemade converted tape machine- stuck together with masking tape. ‘Mum tell him… why can’t we have a proper car… like normal people?’ The van had a ‘custom’ makeover. It had blacked-out port-holes for windows and the interior resembled ‘a tart’s boudoir’ with its pink padded draylon and cushions.

Besides the two we already had Paul found a Morris Minor saloon in Exchange & Mart, only £40.00 a bargain he said. (I wish it were the same nowadays) so by now we were well on our way to having the full set-our own Morris Minor collection. We had plans to move to the coast, so I’m afraid the cars had to go… well most of them. We kept the maroon one which, due to a misunderstanding got scrapped in 1997. (Hubby left it in a friend’s yard, and the scrap man took it away.)

We did not get another one until 2011. This time a complete wreck that (still) needs an extensive restoration. In 2013 Paul bought the Morris Traveller we drive now, bought unseen, it arrived on a transporter from the UK. Fortunately, we are really pleased with it. The only thing is my drive is once again becoming cluttered with Morris Minor’s… some things never change.

Now for the Science.

The Morris Minor first emerged from Alec Issigonis’s sketch pad around 1943 and launched at the 1948 Earls Court Motor Show and quickly became the star attraction in the small car sector; its clean, modern styling and technical ingenuity put it ahead of not just its immediate rivals, but also many larger saloons. The war was won, and people were fed up with years of austerity and rationing. They had enjoyed driving in the Army and were looking for a small (ish) economical car for their families. Issigonis delivered a stylish, roomy car which was affordable to the working class.

The Morris had a monocoque modern body shell, and independent front suspension. Gone were the separate running boards, wings and chassis. Furthermore, Issigonis had purposely designed small wheels for the car giving the car a ‘big car’ look. Lord Nuffield (William Morris) the owner of Morris was not over-keen on Issigonis’s radical design and referred to the Minor (saloon) as ‘a poached egg.’

Initially two versions were available. The two door saloon, and the more expensive ‘convertible’. Followed, by the 4 door saloon which was introduced in 1950, and the Traveller in 1953. The Minor’s versatility was further shown in its light van and pick-up variants, the former being much favoured by the Royal Mail (or the GPO as it was known). The cars were built at Cowley, although production was eventually switched to the Morris Commercial Vehicles site in Birmingham.

Such was the appeal of the Minor that over 1.6 million vehicles were built over its 23 year life-span. Production finally ceased in 1971 with the Traveller and light van being the last Minors built.

The Morris continues to be popular, a contemporary classic, and can often be seen in Television soaps and dramas.

View all posts by Will