Our regular monthly meeting is a great way to ‘kick off’ each month, giving the chance to ramble on with friends and remind ourselves of the events in store. So it was when we met on the 2nd March and benefited from Chas’ reminders of club ‘doings’ to come. We also heard that the club grille badges were now in stock and, as I speak, many are being mounted to highly polished grilles and badge bars. The talk this month was about replacement parts for classic cars and the need to check them carefully before fitting. Some examples of the dangers were shown. Remember folks: check twice, fit once!

On Sunday 4th March, five members attended the show at Sorbas and we provided four of the six British cars on display. Well done boys and girls!

Twenty nine, yes, twenty nine, members gathered at Bar International on the 8th March, for Peter and Karen’s run up into the blossom laden delights of the Estancia Mountains and beyond into the campo, to finish for lunch in the village of Saliente. We had some excitement (of the ‘failing to make progress’ variety), but none were left behind and all ended safely. Good luck with the repairs, Keith.

It was a good turn out for Club 950s meeting at Bar Laguna, on 26th March, with ten cars from the club in attendance……including Brian’s Triumph Mayflower, which out for the first time after its engine rebuild. Great to see her out, Brian!

As usual, full details in Classic Chat here on the website. But members only. Not a member? Join up now!

Another month with lots happening, kicking off with the AGM, on 2nd February. Now, many folks avoid AGMs like the plague. Such meetings are often thinly attended, quiet and self conscious affairs, with people avoiding the front seats in case they get ‘caught’.

Well, not in our club as extra seats were required to ensure over thirty members could sit comfortably around two packed tables. The offer by the committee to stand for re-election (with the exception of Wendy who is not available due to business pressures) was warmly accepted by the membership.

So, the Committee say “Thanks for your support and we will carry on with the development of the club”.

Now, how many clubs can support two events on the same day? Not many, I bet. But we can, because we are a growing, vibrant club! So it was, on 19th February, when nearly thirty members and their classics set off for the monthly run (organised by David and Sue), from Huercal Overa, for a run to the hills, having coffee at Velez Rubio, then returning through almond blossom and past windmills, for lunch at Las Norias.

Meanwhile, down on Vera Playa, another group of club members assembled with the 950 Club for their monthly classic car meet, which this month coincided with the charity event in aid of Leo the Lion: a small boy requiring an urgent operation. A chance to support a good cause and promote the club!

Then, drawing the month to a close, it was time for our first Saturday morning event of the year, on 25th February. An early start maybe, but fifteen ‘get up early types’ had a great visit to Albox Storage Solutions, where we were welcomed by owners Steve and Amanda for a talk about their business and a chance to see and hear about their many interesting projects. Then it was off to La Vida for a slap up lunch!

Right, time to clean wheel arches. See you next month. 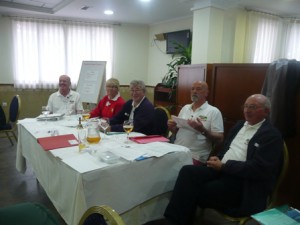 An excellent start to the new year for the club. 41 members attended the AGM on Thursday 4th February at 3.30pm at Hotel Overa. The hotel provided nibbles and refreshments thanks to Sybil and Jean for organising this.

The committee stood down, and following a vote from the floor were re-elected in full, with additional duties taken on by Chas as Events-Co-ordinator. Alan Foreman will handle membership, and I (Wendy Rhodes) will assist Ray with the website and will start a club blog. Peter Underwood took to the floor to express gratitude, and a vote of thanks to the Committee for all their hard work, and to voice appreciation on behalf of all members on the positive way the club is run. A round of applause was conveyed by all. 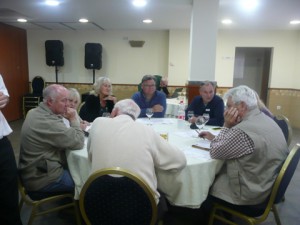 Treasurer Malcolm Smallwood delivered the clubs financial report. The club’s funds stand at £609.84. Judy proposed the accounts which were seconded by Will. At the beginning of the club’s year there were 20 new members, and a further 12 up to the end of December 2015.

The club’s president David Fox stated, that having a club meeting through the summer months had proved successful and if the weather premits will continue this year. (Determined by the intensity of the Spanish sun)

Ray & Sybil were organising the next car run with a meal arranged at Kalavera. Trevor is also arranging a social lunch outside Mazarron on Wednesday 23rd March. While, Malcolm talked about a proposed weekend away to Baza on 4-5th June.

The next meeting is on Thursday 4th March, Hotel Overa at 3pm.

The Committee Members are:

24th OCTOBER – CLASSIC CAR DISPLAY at LA ALFOQUIA
Well, thanks to you, we achieved our goal of 20 classics on display! Thanks to everyone who exhibited and also those who came along on the day to support us. Although cloudy there was no rain, so that was a blessing.

We had the chance to see Alan & Margaret Foreman’s MGB GT on its first appearance after arriving from the UK. Alan joined last month. Will & Charli Gater came along in their newly purchased Jeep, again for its first club outing.
Another new car on show was John and Debbie’s NG, in which they came all the way from Galera, Granada.
We achieved our goal of 20 cars on display and no less than 30 folks sat down to lunch. This makes it the most popular event since I have been keeping records. Also, we contributed over 35 euros to the day’s charity funds and the club donated a prize for the day’s raffle. So, well done all!
So a great turn out and thanks to everyone including our two judges, Will Gater and Alan Foreman, and Sean Mahaffey for help setting up and car movements. Last but not least thanks to our President David Fox for presenting the prizes.
AWARD WINNERS: Car of the Show – Malcolm & Jean Smallwood, Austin Healey. Most Original Car – David Manning, Citroen Ami 6. Member’s Choice – Theo & Karin Aelen, VW convertible. Furthest distance travelled – John & Debbie Valentine, NG.